Jokesters is proud to feature some of the most hysterical, national touring comedians along with our rotating cast of resident headliners and is proud to showcase some of the best local up and coming comedy talent in Las Vegas.  And for those that can't make it to our live show, we even have our own local and national Television Show - Jokesters TV.

Jokesters Comedy Club features comedians from around the world and many that you may have seen on Comedy Central, HBO, Dry Bar Comedy, The Tonight Show, Conan, Late Night, BET, Showtime, Netflix, The Bob & Tom Show, Howard Stern, Youtube, Amazon and more.

Jokesters is a proud sponsor of Battle Comics as many of our comedians are dedicated to entertaining the troops around the world.  If you're looking for late night laughs, then you've come to the right place.

Jokesters was recently named Best of Las Vegas and Las Vegas Mayor Carolyn Goodman recently congratulated comedian and producer Don Barnhart on his 1000th show, proclaiming it Jokesters Day in Las Vegas, "Special thanks are extended to Don Barnhartand all performers for entertaining residents and visitors alike. Please keep the laughs coming as we offer best wishes for the next 1,000 shows and beyond."

Don Barnhart just released his Dry Bar Comedy Special "The Spinal Disintegration of Man (with over 4 million viewers) and clips of his videos are going viral. "Barnhart is a refreshing voice in the standup genre as he mixes a blend of hysterically funny and topical insights about our life and the world around us, pushing the boundaries of the PC culture without being offensive using well-written material delivering it with an improvisational flair."

Some of the best and hysterically FUNNY comedians! 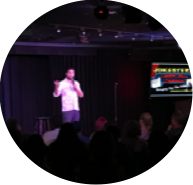 If you have any questions, comments or concerns please send us an email.

We do not have an open mic night.  Professional acts are encouraged to send their EPK.  Due to the high amount of submissions, we will only contact you if we have work available.

GET YOUR TICKETS NOW

Since 1992, Don Barnhart has been producing and performing comedy shows for the military entertaining the troops around the world. Barnhart stars in Jordan Brady's documentary I AM BATTLE COMIC alongside George Wallace, Dave Attell, George Lopez and many more about the importance of humor and laughter to those serving in war zones.